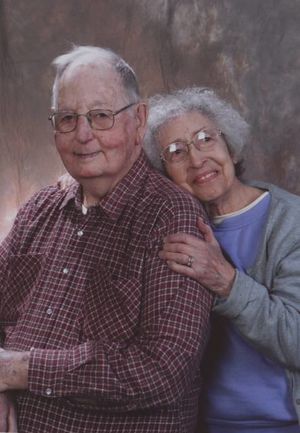 After 62 years of marriage, the longest they were apart was between Saturday and Thursday.

He graduated from Bingham High School in 1941, and served in the United States Army during World War II.

Eugene worked in the naval shipyard in Portland, the Kennebec Mill in Bingham and attended the Massachusetts Trade Shops. He was employed by the First National Stores Inc. in refrigeration and air-conditioning maintenance for almost 30 years. He worked in the maintenance department of Concord Hospital in Concord, N.H., for six years.

Eugene was a devoted and beloved husband, father, brother, uncle and grandfather.

He loved fishing, hunting and target practice. He and his wife, Emily, spent many happy hours boating on Wyman Lake, China Lake and the Kennebec. Together, they camped at Lily Bay and along the Gaspe Peninsula, the Cabot Trail and Prince Edward Island.

Eugene deeply loved his family and delighted in treating his grandchildren to banana splits. He enjoyed blueberrying and making baked beans. His sense of humor enriched the lives of everyone around him. He demonstrated a strong Christian faith through his many kindnesses.

Eugene was a member of First Baptist Church of Fairfield for 50 years. He served on the Board of Trustees and as a deacon. With his wife, Emily, he visited the elderly and helped to support the church's mission program.

Eugene was predeceased by his parents, a brother Philip Beane and his recently deceased wife Emily.

The family is thankful for the loving care provided by MaineGeneral Medical Center, Thayer Unit, especially the staff on 2 Central.

Visiting hours will be 5 to 7 p.m. Monday at Lawry Bothers Funeral Home, 107 Main St., Fairfield. A memorial service for Eugene and his wife, Emily, is planned at 2 p.m. April 1 at First Baptist Church, 12 Newhall St., Fairfield. A reception will follow. Burial will be later in the spring at the Falls Cemetery in Benton.

In lieu of flowers, memorial gifts may be made to the church's mission program.